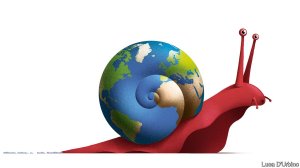 In the bad old days, before globalised efficiencies were introduced, a company I worked for had a few laughably simplistic processes in place. For example:

If a printer ran out of ink. I’d call Rob and he’d pop round and replace the cartridge. I could then carry on printing.

After our new masters took control of our amateurish operation, a new process was introduced. If the printer ran out of ink, I’d log on to our intranet and go to the page marked ‘premises’. There I would select the nature of my issue, type in the registration number of the printer (dammit, hang on whilst I run round and write down the 18-digit number) then add the desk number I was working from and click [Submit]. Following this, a message would be received in a central procurement office somewhere in America, who would make a note of my request and then send a message across to the UK central office for their attention to update the records and then forward my request. As a result of this, a message would eventually find its way to Rob to ask him to replace the cartridge in the printer. He’d then pop round and replace the cartridge. If I was lucky, I could do my printing the following day.

On another occasion I was asked to attend an International Women’s Conference in Brussels. I was included along with a sprinkling of other male colleagues as otherwise the conference may have appeared discriminatory (I’m not making this up).

As a seasoned traveller, I found a hotel just off the Grand Place for €59 per night for the 2-night stay. Oh no you don’t said HR, we will book you into a room in one of the approved, panel hotels. Which cost €195 per night. “I’m saving the company money, it’s closer to the venue…” – I was wasting my breath. I checked into a room in which I could have played tennis and sat gazing bemused at the admittedly spectacular view across the city, wondering what the hell was going on.

What was going on of course, was globalisation. The irreversible, incontestable, rampant shoring up of all western industrial activities. Heavy industry, manufacturing, service, blue collar, white collar – no matter. All activity was now to be controlled centrally in the name of efficiency.

If you spoke out against it, you were/are a Luddite. A stick-in-the-mud troublemaker. You just “don’t get it”. You’re an idealistic throwback to simpler times. You’re a relic from an age when such wasteful activity as talking to people in the same building and making decisions that could be swiftly and effectively implemented was the height of folly.

Get with the program. This is cutting edge industrial practice. By centralising all activities we can reduce costs and implement just-in-time highly efficient business practices.

And everyone and everything bowed down before these new mantras and tablets of wisdom. To resist was heresy. To contradict was to show your ignorance. Private firms outsourced and waited for the holy tablets of the monthly MI Reports to show their efficiency gains, reduced costs and increased profit margins. Public service organisations were shoehorned into accepting these practices as “the market” would right their horrible inefficiencies and bring bright new days.

And some good did come out of it. International standards, passporting of goods and services, some working practices rising to meet the growing connectivity of the world.

There was however a tiny flaw in the sale of this approach as organisational restructuring to produce greater efficiency and cost reduction. It was nonsense. The actual purpose was to create a series of channels for goods and services with limited entry points. Those plug points being accessible only by the largest companies at one end and the cheapest providers in the other end. Hence the corporate deals with the panel hotel chains and the multi-plug adaptor handed to China.

And this we have found to our cost all manner of issues both local and irritating (see above) to catastrophic on the biggest stages.

The debacle over Personal Protection Equipment (PPE) for our front-line medical and care staff has been one of the hottest potatoes of the current Covid-19 crisis. Nobody is likely to come out of all this smelling of roses when the final enquiries are completed. But what a ridiculous situation we have in getting the supplies to the people that need them. Even the BBC seemed aghast when telling the story of local providers unable to provide.

Factories, manufacturing centres, clothes makers, home-based seamstresses that lived within walking distances of hospitals and care homes were producing the medical gowns required. They had been previously accredited and supplied the NHS. But because they were not listed as one of the approved providers, their gowns could not be used.

Constrained by the “efficiencies” of globalised, centralised process controls the authorities can’t respond nimbly to take advantage of local providers. What a ridiculous situation. Down the road we have the company that will meet our needs. But because somebody hundreds of miles away doesn’t have their details on a spreadsheet, we can’t use them. Instead, we must order them from China and Turkey.

The bloated, bureaucratic set-ups of so many corporates (not to mention political unions) and most troubling of all, public services means that responses are slow, lumbering and totally inflexible. The commodification of livestock animals and unchecked consumerism (“you can have strawberries every day of the year”) by some accounts have pitched humanity against the planet

There are many things being said about “when this is all over”. I’m not daft enough to think that the tight, corporate grip of control already established will be relinquished or even loosened. But I do hope that some cool heads will be able to recognise their reputations will be shot if they do not do something to incorporate some flexibility in their processes in the future.

More broadly: food supplies, clothing and furniture and all manner of less-than-£100 items could be produced within our borders. Brexit – whatever your thoughts on the event – does give a generational opportunity for new, entrepreneurial manufacturing opportunities alongside the sprouting service sector. And to be less plugged in to the gush of goods from China would be no bad thing.

Whether or not Localisation will become a thing is debatable. It faces huge start-up challenges, not least from the vested interests of globalised gluttons. And who is to say that the new entrepreneurs would be able to resist the inevitable buy-out offers if they strike oil in their ventures? As ever, time will tell.

Now – I would print this blog out, but unfortunately my printer needs a new cartridge. And I don’t think Rob will get the message for a wee while yet. So I’ll just post on my page for now.