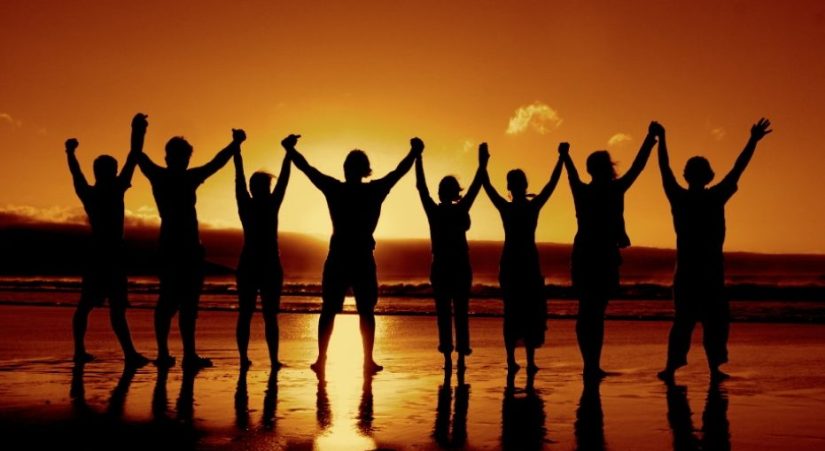 One phrase is on all our lips right now: When this is all over.

We are all nostalgic for our future. When things “get back to normal.” Problem is, normal was a big part of the problem.

We have a rare moment, when we as a species can take stock and reflect on where we are heading. And whether we want to continue on this path.

Some things worth thinking about right now:

These are dangerous times for the elite. For the ones who love power, money and control above all other things.

Which is why they are scrambling to take control of the narrative. ‘Relying on the science’ has been the apparently benevolent byword for the British government. Others have deliberately sought to maintain and heighten feelings of fear and dependency. There’s money to be made. Whilst the behaviour of some supermarket sweepers and stock-pilers has been reprehensible, the billionaires have – as always – sensed their opportunity to profit.

Here’s our opportunity to reconsider our values. And reappraise who and what is important. Perhaps those TV and pop stars, those footballers and movie actors – whilst they bring us great pleasure and distraction – maybe they don’t need another million in the bank. Particularly when they use convoluted accounting practices to avoid paying tax to fund the public services they are so keen to be seen supporting. Forget the warm words guys; just pay your taxes. In between posting homemade videos, change your accountant.

We had a gear change in the 18th and 19th centuries. Fun though it was to go to war with each other every so often, the western European states focused instead on the industrial revolution. Of course, part of the transformational technologies were new weapons and war strategies. But a few philanthropic ones also built the workers’ cottages and entertained the notion of paid holidays. Baby steps, but good ones.

Two shattering world wars in the 20th century brought us to the next gear change. Enough was enough. The comparatively bloodless misery of the Cold War was not visited on the majority citizens of the prosperous West, who eased themselves into the ground-level peace that followed.

The 1950s. Hailed as a golden age. Simple times, where most people had modest life expectations. Happiness was defined as having enough to eat, a nice home, a hard day’s work for a fair day’s pay, enjoying a holiday and being surrounded by family and good friends. I’m sure not everything was rosy in those gardens, and it’s easy to be cynical. But really – how good does that all sound right now?

The next gear change in the 1970s/80s can be summed up in a word – greed. It was when the United States decided that healthcare was a privilege, not a right. And that people could be made to accept it was the norm to pay through the nose.

It was the UK and others in the English-speaking world who decided that ‘trickle-down economics’ was the fairy story for the masses. Let’s increase the wealth of those at the top and everyone will benefit. The trickle-down of this new wealth – the rising tide that will lift all boats – was the dream that we were sold.

And it was lapped up. Cars, shoes, second homes, retirement on the beach at 55 – we could have it all. The new industrialists were building spreadsheets, not factories. Old industry and their workforces were to be ditched in favour of services, consumables made on the cheap and sold for huge profits to the malleable masses.

We were part of this. We willingly participated. Indeed, without our consent the rampant consumerism wouldn’t have happened.  Only the miserable lefties asked why a cotton shirt made for less than £1 could be sold for £75. Did we stop buying them when the dusty, corrugated iron lids were lifted off the sweat shops? Did we decide that a pair of shoes for sale at £1,000 was insane? Well it’s the old adage – don’t ask whether it’s worth it – just ask how much do you want it?

An Englishman’s home is his castle – and the council tenants were offered the chance to buy their own property at a discount. Hugely popular and brilliant for those that wanted to and could. The legacy – as we certainly weren’t building any more council homes – is the luckless ones left to live in the family home, or private rented accommodation with high rents and low standards.

So, when things get back to normal – what do we want normal to look like? Here’s a few things to consider:

I’m guessing that list looks less attractive the further down you go. But that’s the thing about rebalancing. In order for it to work, there are winners and losers. But if you consider the current losers have been losing most of their lives, it’s mostly about fairness.

The best times in our national (and indeed global) lives have been when a sense of fairness prevails. Societies at peace with themselves. This is that rare, sweet spot when the state and private sectors are working in the right balance. When the capitalist drive is tempered by the social imperatives. Or the socialist dourness is lifted by the capitalist sparkle.

Will we go for this? Will there be a reset of humanity? Or will we revert back to the ever more rampant consumerist approach when the shackles are finally removed. “When this is all over.”

That is very much down to each and every one of us. Don’t be fooled by rich men in expensive suits trying to intimidate and scare you. We hold the power and we always have. Whether we choose to use it, time will tell.